Well it has been over 12months since the Tuesday nighters have been and seen first hand what is happening on "The Extension".
With that thought in mind and having had to cancel the last date, this gave me a bit of extra time to actually get a lot more work done.
As mentioned earlier I enjoy the construction side, so it was out with the tools and ..... 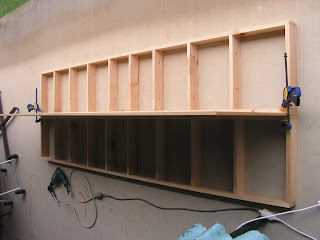 Construction of the next peninsular. The backdrop is sandwiched between the framework to become self supporting. All that is left here is to bolt together. 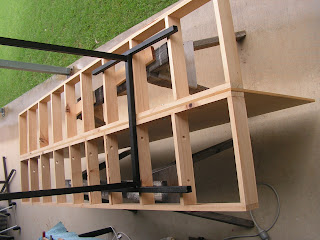 The whole lot is then turned upside down and the pre-assembled, welded steel framed legs are then bolted on. The module is then turned back over and carried into the train room for final adjustment. 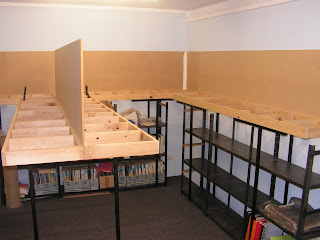 Here it is, a simple matter of attaching it to the existing benchwork and then adjust the height. All my legs have adjustable feet welded into the base. Yes I had to move the display layout module. It is now in the workshop awaiting its fate!!!!

The plan with this peninsular is for one side to become a junction station leading off into hidden staging  and the other side will just be the branch passing through the scene. 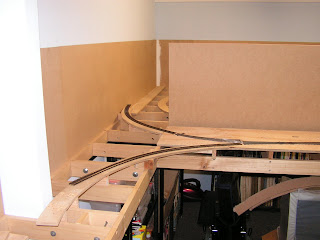 This shot hopefully gives you an idea of what I am trying to acheive!!!!! The track heading away in the photo is the hidden two track staging area and the track heading to bottom of picture continues on to "Wattle Flat". 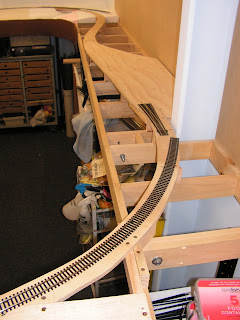 This photo shows the missing link between the finished landscaping and the junction. 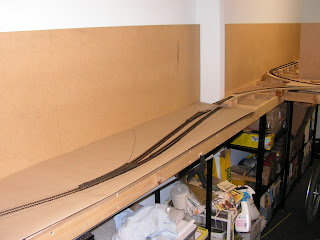 Doh, in the reverse order but the brown paper template gives you an idea of what I was planning. All the trackwork is just placed loosely to 'get the feel'.

I have more to show when I get the shots off the camera. I am not the sharpest tool in the shed. I look forward to the feed back from the fellas, come this Saturday.

Until then, bring on Tuesday night as we are heading over the Craig's place aka Cassino for a look at the current progress. I can't wait.

Until next time.
Posted by WATTLE FLAT at 4:13 AM 2 comments:

Yes the week-end of the 21st and 22nd seem a distant memory so I thought I'd have a look at the shots and fun Geoff, Brendan and I had, and share a bit with you. 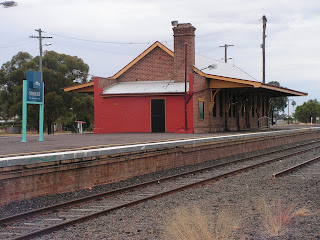 Here is a current shot of Moree station, and it is served daily with a passenger service to Sydney.

We left Queensland with plenty of time and the intention was to take in some railway sights along the way. Although we travelled along the QR line to Goondiwindi there was nothing to see until we crossed the border and arrived at Boggabilla. Sadly the roof has been removed, no doubt due to asbestos. 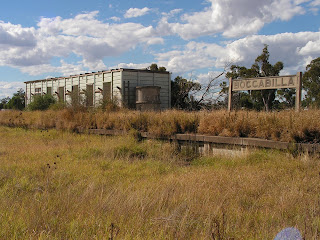 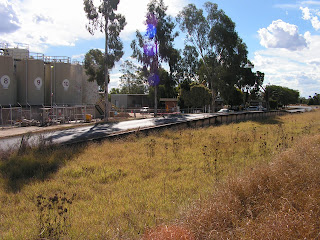 Infrastructure is still mostly in place. The above loading bank is currently a road access to the local fuel agent. This shot is taken on the platform with the station  behind. The end of the line is to the right of shot. 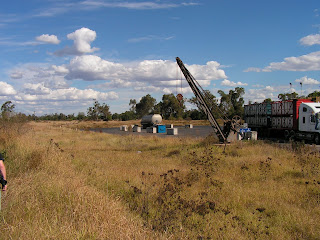 This shot is also taken from the platform and is looking towards Camurra. The yard crane is complete and silos are to the left of shot. 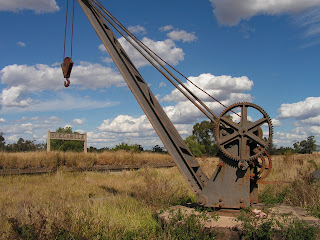 Peter Boorman makes a nice etched brass kit. The station is to left of shot and silos to the right.

Here is a line drawing I dug up from some paperwork I got from a old driver that he had in his "appendix". I assume it would have been in the signal box. Sorry unsure of a date but it was in the 1943 issue I was given. 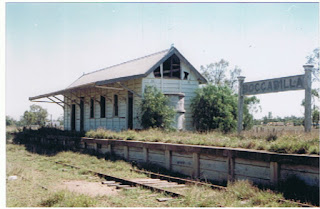 Here are a couple of shots I took back in 1997. All was in place back then and the grass was a lot shorter. 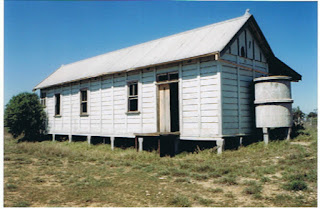 Another of the rear from 1997. I wish I had taken more shots. 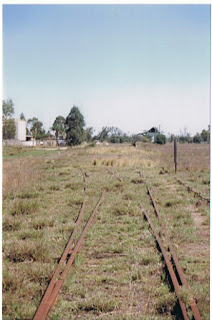 The last shot from 1997 is looking south. The large silos facility can be seen in the background.


We left Boggabilla and casually made our way to Moree and the show venue. All the greeting taken care of and it was time to set up the layout. There are some great characters in this hobby and I really enjoy catching up with them. 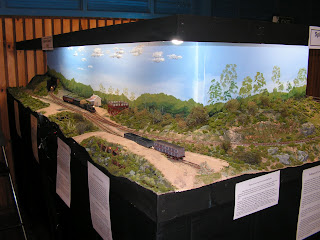 We had a great spot and the layout went together well. There were more trains than places for them but it made for great variety over the weekend.
There were excellent layouts on hand and as with all country shows plenty of time to catch up with everyone, learn a new trick or two and spend money.

The interation with the public is amazing at the country shows because so many tell you yarns from "way back when". I always make time to listen. One gentleman had travelled up from Manilla and was telling me a story when I mention that Geoff and I had been through photographing the railway infrastructure. He informed me that the Goods Shed had burned down recently. 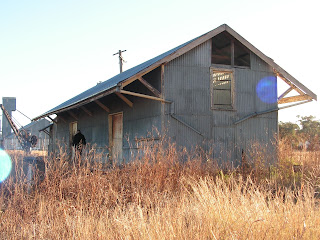 Here is one of the many shots we took in 2008. That is Geoff on the platform amongst the Cobblers Pegs!!!!!!!

Manilla lost there Railway Refreshment Rooms in a fire in 2006 and now the Goods Shed has gone. The gentleman also advised the bridge to Barraba is not far from going as well. I have some great shots of this too, but arr for another post.

Anyway, where was I, arr that's right.... With the show over and all packed up we headed to the Albert Motel for our last night.

Monday morning dawned and after checking out we made our way to the railway yards in Moree for a poke around.

Here is a 1971 diagram I was given a copy of and can be used to assist with the photos I took of some hidden treasures. 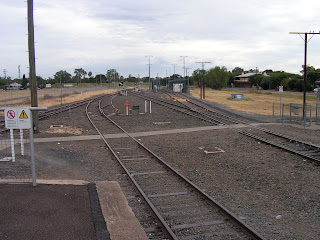 Here is a current day shot looking north to Camurra. I'll let you decide if much has changed. 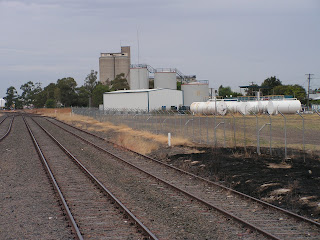 From the other end of the platform looking south. I am unsure if this is the same fuel agent listed in the diagram however on inspecting the compound it appears to be so. 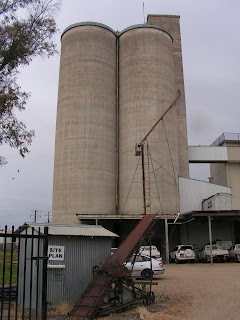 After inspecting the fuel agent siding we headed down to the old silo siding and found some real treasures. The line diagram answers the questions we asked ourselves that day. 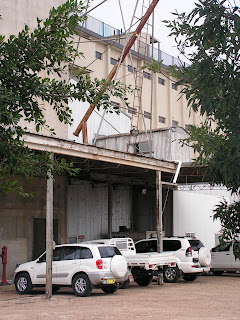 Where the cars are parked under the awning is the siding and loading scales with all still intact!!!! 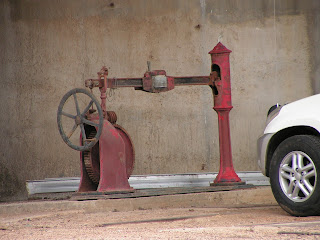 Who would have thought some 40 years later the rails and scales would still be intact. 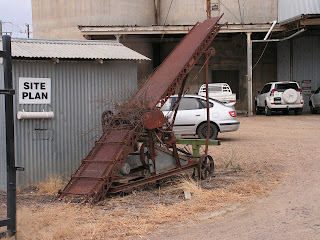 Looks to me like a bagged wheat loader. This find was also in the same yard.

Times sure flys when your having fun and with it now being mid morning it was time to hit the road and head for home.
It will be interesting to see what happens to this area as the Moree bypass is currently heading in this direction. Who knows what will remain???

I have to say thankyou to the organisers for a great show with plenty of good old country hospitality. A big thanks to Geoff and Brendan for great company with plenty of laughs and for inviting me. I have to behave myself as he has his own car now, with a towbar!!!

This weekend is the Brisbane Model Train Show at the RNA show grounds so I must sign off and get my shopping list together.   Until next time.
Posted by WATTLE FLAT at 12:45 AM No comments: