Well just a small update as I was lucky enough to find the photos for the cutting and shaping work done with the foam insulation board. 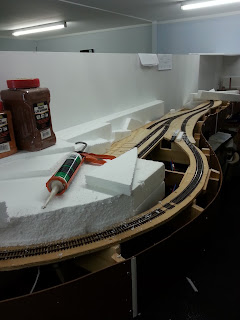 The Masonite facia is in place now and the profile is cut to represent the hills and gullies I want in the scene. Large sheets are cut and glued and then weighted down. I use an acrylic based no more nails as it dries quick and does not eat the foam. I cut the foam with a large bread knife and a hacksaw blade. 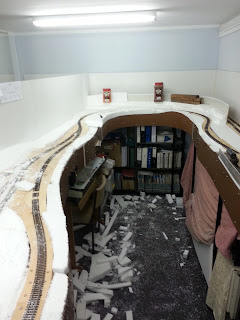 The carving and filing are underway. This is a very very messy job with static electricity causing the foam shaving (little balls) to go everywhere and stick to you and everything else.
I went to Bunnings and brought a cheap shop vacuum and it worked a treat. 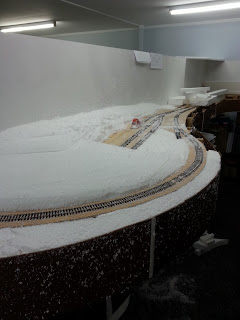 When the cutting is finished I then used a panel beaters bog filler file to carve the hills and gullies. By far this is the worst as it creates an almost powder like material the goes everywhere but at least the shop vac picks it up.

The above shot shows the cutting that the ballast is cut from, is starting to take shape. I will then cover it with paper towel dipped in watered down white glue.

Until next time , Happy Modelling.

An area in the hobby I really enjoy is taking an American kit and trying to make it look Australian.

My recent project has been the Walthers Golden Valley Canning kit as shown below. 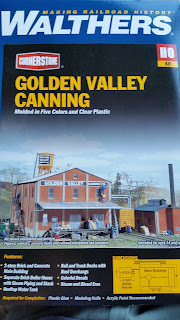 I commenced construction like any other kit by removing the flash from the parts I intended to use.

Prior to attaching the windows, doors and frames I airbrushed them with Tamiya acrylic Buff XF-57 to give the kit a different look to the others.

Prior to assembling the walls, which are a nice scale looking brick, they were brush painted in a light grey / white mix of the same brand of paint and while the paint is still wet, I then wipe it off . This leaves the paint in the grooves of the brickwork or more commonly known as mortar lines. I liked the colour of the bricks so when all the walls were done I then painted the columns a concrete colour Tamiya XF-19. 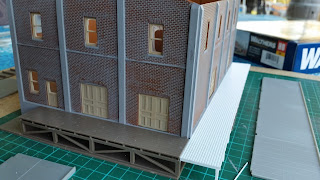 I forgot to take a picture of the walls during painting. After the walls had dried I then installed the frames, doors, windows and glass work.
I then assembled the walls as per the instructions.
The kit comes with a loading dock for trucks and one for the railway however I wanted the railway one to be the full length of the building. After attaching the truck loading dock, again as per the instructions I used Evergreen Styrene to construct a dock / platform. I used styrene similar in size to the other one already so as both would not look out of place. 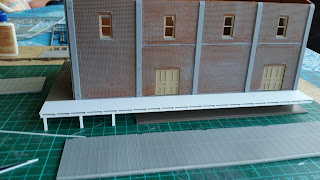 In the above photo you can see I have had to extend the corrugated awning over the platform and the extra I needed is actually also in the kit as a spare, just needs to be cut to length bonus!!! 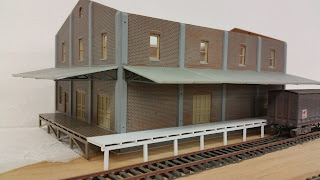 I now followed the instructions and attached the awnings, simple. By extending the awning you are 1 awning bracket short and as my layout is operated at eye level, I thought I should scratch build one as there should be four for the truck bay and 5 for the railway.
I used Evergreen Styrene of the same size as the existing brackets, using one of the others as a template and then glued it in the middle of the other 4. You could skip this as the 4 brackets that come in the kit will hold up the awning with no problems at all.

The photo above now just needs the roof, facia, barge and gutter along with a few other bits and pieces. 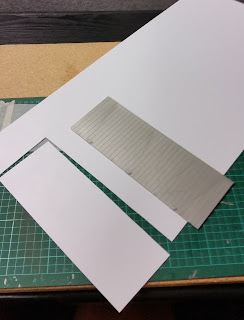 Now the roof that comes with the kit is the standard Board and Batten style (I think that is what you call it)  that seemed to be popular with a lot of the Walthers kits but sadly nothing like "Down Under".

I buy the large sheets of Evergreen Metal Siding item no. 14525 which comes in a sheet 610mm by 305mm and is great for cutting large roof areas as it reduces waste.

I then use the roof that comes in the kit as a template and mark out two roof halves, cut and then glue them on top as per the kit instructions. 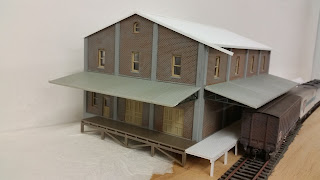 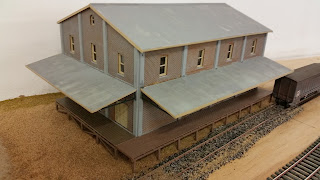 I then painted the corrugated iron roof with  the Sky Grey XF-19 quickly with a 10mm wide flat brush ensuring that the white can slightly be seen in places, which gives a nice aged roof look.
I then paint the barge, facia and gutter the Buff colour I used on the windows and doors. 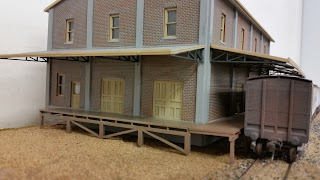 In this low shot you can see the nice awning bracket detail. I need to add the down pipes that come with the kit and then blend the building into the scene. Tuffs of grass around the posts and rubbish will make the scene. 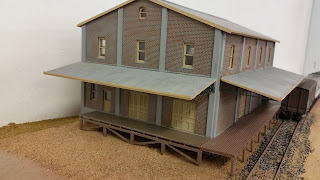 While I take great joy in these projects they are a break from layout construction for when it gets too hot or cold in your train room. I hope you enjoyed my journey and get something out of it.

Posted by WATTLE FLAT at 9:46 PM No comments: